One life, one game, one team, one invincibles

One life, one game, one team, one Invincibles (So far)

So what will Arsene do at the end of the season? Will he take a job upstairs? Will he retire gracefully? Or will he see out his contract in the faint hope that now he’s seen Arsenal through some barren years, he can reap the benefits of the new revenues to win that elusive champions league trophy?

I am neither an AKB or a WOB. I see Wenger as an elderly relative, for all their frustrating stubborn habits you don’t kick them out on the street, stick with what you know and who you love (mostly). Wenger has been consistent, top four finishes. But frustratingly consistent, because we never kick on and win the title when a savvy signing at the right time might have done that (take Alonso in 2008 for instance, we haggled, procrastinated and lost out). But, the main point is, he has built a legacy, to build from, a sustainable one. His successor wont have an easy task, but it will be sweetened by the heritage, the team, the youth system, the staff, the truly global fan base and the massive potential to make Arsenal a world powerhouse. That is Wenger’s biggest gift to us as fans. Because, sadly, Arsenal is big business and the board see us fans as commodities not customers or more emotively, stakeholders in a special heritage. Not a surprising observation I know!

So let’s look at some parables on two other managers to see why we should give thanks for what we have. And then a quick gander at what Pep Guardiola might do.


When Ferguson left United, he left a magnificent history, but a team waning, relying on game old timers like Carrick and the mercurial talents of Wayne Rooney. Watching the floundering Rooney, out of form, out of shape and wasting energy foaming at the mouth at officials is great panto. The once happy prince has been shod with horseshoes and now looks like he’s carrying his steed around the pitch as a punishment. It all started to unravel for Moyes (and United) when he panic signed Fellaini on deadline day, what a monstrous biffa of a player. He looked good on highlights shows, because he looked good playing for Everton behind the striker, a decent goal here and there, putting himself about. But, he’s a fouler, not a tackler, in defensive midfield he’s slow in the tackle, gets involved in feuds and picks up yellow cards. He’s not a quick movement player, he needs to control, steady and release, slowing down play and crippling counter attacks. Basically he’s not a United player, at least not a player United fans are used to. There were a number of Arsenal fans who wanted him signed, I’m glad we didn’t, he wouldn’t have solved our eternal grail quest for the holy Defensive Midfielder!

The fact that after spending a quarter of a billion pounds, Louis Van Gaal still starts him is testament to how far United have unravelled. But they could still win the title! That’s how mad this season has been. Van Gaal is a showman, a pseudo-sociopath who inexplicably seems to love to fall out with his stars. His “tactical genius” by subbing on Tim Krul during penalties at the World Cup was a big sham which paid off. Of course LvG revelled in it, but his luck has run out at United. And he plays Daley Blind.. who is in no way world class. At left back he’s slow off the mark and a quick witted winger will own him. In central defence he’s got no physicality, tidy, but no recovery pace, meaning Smalling (who is a success story for United) has to do two lots of work. United’s boxing day game against Stoke was astonishing to watch.

Stoke are transformed, a giddy mix of filth and flair, I feel dirty saying it, but I quite like watching them this season. Shaqiri, Bojan, Affelay are classy operators, but the player who epitomises the “new” Stoke City most of all is Marko Arnautovic, he’s a Minotaur, both matador and bull, guile and brute force. A snide villain but a great player when his head is on the game. Mark Hughes deserves credit for the transformation of his team and what a player Jack Butland is for someone so young.


Caption: Problems at United. Rooney playing matches with a horse on his back being one of them. Picture source, the author.


Compare Wenger to Mourinho. And look at the sustainability aspect of their last decade or so. Wenger is, sometimes unfortunately, risk averse, but he’s maintained consistent (and frustrating!) achievement* to bring revenues in whilst we paid off our huge stadium loan.


*I daren’t  use the word success, because success in football, is based on trophies and other than the last two FA cups, success has been absent for a number of years. Don’t let Uncle Arsene convince you otherwise.

Mourinho on the other hand, has taken a scorched earth approach to success and as has been observed by many before me, he normally burns out within three seasons at any one club. I’m careful to use historical analogies because it can trivialise terrible things against what is only the act of a football manager.. but through history there are examples of defeating your enemies, but simultaneously destroying your critical infrastructure and the ability to feed the people after you literally burn your own bridges and grain. Chelsea as a club are now wallowing in moral poverty, they are hungry for principles and decency and I wish them luck in finding it. Mourinho has fallen out with his players, with some fans and most importantly made himself a pariah with the medical profession, match officials and the FA. Chelsea have to somehow claw back some dignity now he’s gone.

If you polled Arsenal fans and ask them if they’d take Mourinho as their manager, most would be horrified at contemplating that concept.

So United appointing Mourinho should LvG go (and he is still in situ at time of writing), would be an unmitigated disaster (after 3 seasons of relative high performance). Decent United fans wouldn’t stand for it.


With the announcement Guardiola is leaving Bayern Munich at the end of the season, there are potentially four suitors in England for his services. City, United, Chelsea... and Arsenal.

But how real or credible is the Arsenal link?

There have been reports in the press that Arsene has been in touch with Pep Guardiola, to ask him if he would be keen on replacing him at the end of the season.  The story originated from Bild, the German tabloid and then subsequently picked up by the Sun and so on.. so the veracity of the story is questionable.

But could it happen? My view is no. I don’t think Arsene would ever call Guardiola to ask him if he’d like to take his job! It sounds nonsensical.

Arsene, for all his selfless love and sacrifice for Arsenal, would only step aside for someone he himself has chosen, who would worship at his shrine, who would canonise his memory, dedicate every victory to what Arsene has provided him and play angelic music whenever his name was mentioned. If Arsenal were to go for Guardiola, the board would have to do something they never usually (at least publically!) do, be decisive, be brave, risk upsetting Wenger. Could we get him? I think it’s unlikely, very unlikely, but look at the facts, Pep likes a challenge and here is a club with something missing on their CV, a European Champions cup... a club with a huge fan base, huge revenues and no debt. If the deal is right, Guardiola would make Arsenal great.

So the principle of Wenger approaching a manager who is *more* successful than him in some patriarchal fatherly way, looks like a fantasy to my cynical logic. And the concept of the arch control freak Arsene taking an upstairs job while a new manager does it his way, does not seem feasible (unless he can pull the strings himself – whilst sitting in the aforementioned shrine listening to specially commissioned angelic music on Spotify).

But, you never know. If I’m proved wrong, I’ll delightedly eat my words! 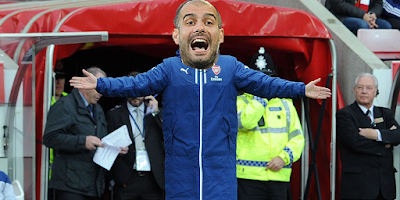 Caption: What Pep Guardiola might look like managing Arsenal, if he had a massive head. Would he want to change everything about the club though? Including the manager’s customary long coat? (photo sources soccer.com and the Guardian)

Gooner 48
Yet another blog on Arsenal Football Club. About me? All you need really know is that I'm a Gooner who saw his first match while Derek Tapscott was still playing. My real name is Brian and my spiritual home is still the old North Bank but you'll find me in Block 15 for home games these days. But this site won't be restricted to my ramblings alone. You'll also find: Clive Palmer, Mark King, Gareth Wilson & Mel Melis and maybe some more to come.